For the past 20 years, living and working in New York, Miranda had attended meetings of Adult Children of Alcoholics. That experience had made life different for her and much better.

Both Miranda’s parents were alcoholics. Her father had been the senior officer in a Palo Alto bank, who drank too much and became resentful at hitting the ceiling of a career in which he thought he deserved so much more.

So he retired early and drank himself to death. 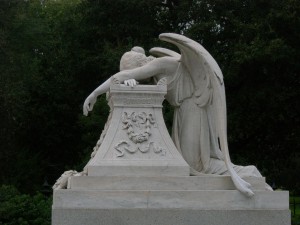 The Angel of Grief, in the Stanford Arboretum….